Jürgen Handke as a Musician

For all his life, the founder of 3M-Solutions, has been a keen musician. He played - in addition to his academic work - first as a classical musician (cello) and then, in the 1970s, among others, with Matthias Jabs (later Scorpions) or Hannes Folberth (later Eloy) in the Hanover Rock Band Deadlock. His instruments: vocals, flute, guitar, bass, saxophone, cello, blues harp. 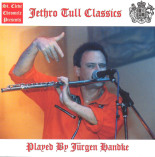 In the 1990s and 2000s, he became an internationally reknown interpreter of the music of the English band Jethro Tull. In 1997, he released his CD "Juergen Handke Plays Jethro Tull Music", on which well-known Jethro Tull songs were synthesized on computer and all of Ian Anderson's instruments were added live: vocals, flute, guitar, saxophone, cello and blues harp.

In more than 200 concerts, Handke performed the music of the band Jethro Tull live on the stage with an additional multimedia show.